What Operating System does TvXplorer™ work with?

What are the recommended Windows hardware specifications?

Airwavz.tv recommends using a Windows computer with H.265 decoding that can be offloaded to the graphics system, rather than rendering the graphics 100% on the CPU.

Minimum Windows PC Config for ATSC 3.0: Use a laptop with a Core i3-8310U processor.  While the CPU may not be that powerful, the GPU renders H.265 up to 4K.  In addition, a Core i5-7xxx desktop should handle ATSC3 4K broadcasts without a problem.

Poor PC Config for ATSC 3.0:  A Core i5-4300M in a laptop isn’t a good candidate for playing back ATSC 3 broadcasts. Core i5 was the first generation of processors where Intel accelerated H.265, but it’s not clear that it will support all H.265 profiles and levels used with ATSC 3.0.

What is RedZone Receiver™ ?

RZR is built for anyone working on ATSC 3.0 (NextGen TV) commercial deployments.  Connect RZR to a Windows 10 or 11 PC, and you can watch free Over the Air television, while analyzing the broadcast quality.

RZR is used by most of the major television broadcasters in the United States.

How do I use RedZone Receiver?

RedZone Receiver is best used with Airwavz Windows companion software TvXplorer.  TvXplorer is a professional grade test and measurement tool that decodes the TV  broadcast and displays HD video, as well as providing a wide array of signal characteristics.

RedZone Receiver can also be used standalone with Airwavz SDK.   The SDK supports Linux, Android and Windows.  Connect the RZR to any computer USB port, install the SDK and run command prompts.  Using RZR in this capacity is intended for ATSC 3.0 developers.

What do I get with RedZone Receiver Plus?

How can I give you feedback or product suggestions?

Happy to hear from you!

Use the Contact Us page to send us email.

How can I buy TvXplorer Suite v2?

It’s so easy!  Airwavz sells and ships RedZone Receiver directly to you, anywhere in the world, and TvXplorer can be downloaded immediately after purchase.

1. Add TvXplorer Suite to your shopping Cart
2. Complete the checkout, and TvXplorer is immediately available for download
3. RedZone Receiver ships to you via USPS in 2 – 3 business days within the US

To pay by Purchase Order, or Wire Transfer, send us a Request for Quote

What kind of TV coverage can I expect to get?

RedZone Receiver is a hybrid ATSC 1.0 & 3.0 USB device, and is capable of receiving all TV Channels 2 thru 32.

Visit our Deployment Map to see where ATSC 3.0 is in your area 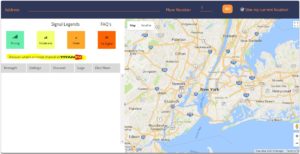 Where Can I use RedZone Receiver?

As more cities roll out ATSC 3.0, we will update our Deployment Map and FAQ as soon as possible. If you’d like to be kept informed, sign up for our newsletter

An ATSC (Advanced Television Systems Committee) tuner, is often called a receiver or HDTV tuner.  is a type of television tuner that allows reception of digital television (DTV) channels transmitted by television stations that use the ATSC standards. Such tuners may be integrated into a television set, USB Dongle, VCR, digital video recorder (DVR), or set-top box that provides audio/video output connectors of various types.

See our example below of RedZone Receiver as an ATSC 3.0 TV tuner. 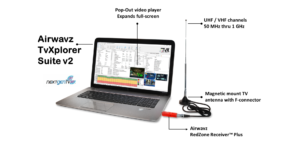 What radio frequencies does RedZone Receiver operate on?

Airwavz RedZone Receiver can access any frequency 50 MHz to 1 GHz, and cover just beyond TV Channel 83.

All of Airwavz television receivers support 50 MHz to 1000 MHz (up to 1GHz), in the full VHF and UHF spectrum.

The VHF band is further divided into two frequency ranges: VHF low band (Band I) between 54 and 88 MHz, containing channels 2 through 6, and VHF high band (Band III) between 174 and 216 MHz, containing channels 7 through 13. The wide spacing between these frequency bands is responsible for the complicated design of rooftop TV antennas. The UHF band has higher noise and greater attenuation, so higher gain antennas are often required for UHF.

Where can I find the documentation for the Airwavz RedZone Receiver SDK?

Documentation on how to use the SDK with Airwavz RedZone Receiver™ is included as a read-me file in the SDK software download.

To find the SDK again, login to “My Account” and select Downloads.

What versions of Linux are supported by the Airwavz RedZone Receiver SDK?

We currently test and support 64 bit versions of Ubuntu 16.04 LTS on x86 platforms.

Why are there no TV broadcasts on channel 1 or 37?

Channel 1 was deleted in 1948 to be used for two-way land-mobile-radio systems, while Channel 37 is reserved for radio astronomy.

Does the Airwavz RedZone Receiver support operating systems other than Linux?

From a hardware prospective the RedZone Receiver can be connected to any device with a standard USB 2.x or USB 3.x port. This includes devices based on Android, Android TV, Windows, Linux and MAC Os.  Software support for the Windows operating system will be available May 1 2019.  If you have a need to license our software in volume, please contact us.